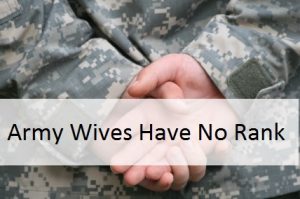 Army spouses have no rank.

It seems like this would be a statement that goes without saying. But lately, I’ve heard many stories about wives or spouses believing they wear the rank of their soldier.

And surprisingly, it hasn’t been just an officer vs. enlisted mentality as so many believe it always is.

We’ve All Been There When This Happened…

Sally consistently introduces herself as the wife/spouse of (insert rank).

Sally can’t complete a sentence without letting you know about her soldier’s rank, how much he makes, or his newest promotion, or…well, you get the picture.

Sally lets you know not to be offended if she doesn’t speak to you in public because she’s a (higher ranking) spouse and you’re just a (lower ranking) spouse — and that one is my personal story! It happened to me within a few days of arriving at my husband’s first duty station.

And by the way, my apologies to anyone reading this who is named Sally – it was the first name that came to mind. 🙂

Be Involved in His Career without Being His Career

As an Army spouse, getting wrapped up in your soldier’s career is very easy. It is, after all, one of the few career paths he can choose that involves the entire family. I can’t think of many corporations with family support groups or social gatherings for spouses only.

But whether you’re the General’s spouse or the spouse of a PV2, you’re just a spouse! No more, no less. Or, in the eyes of the Army, you’re a dependent (I hate that word, by the way!).

Own Your Own Identity

Your husband’s rank has no bearing on who YOU are as a person. When I had the title of director at work, my husband didn’t go around telling everyone he was a “Director’s husband.” Though that would have been kind of funny, now that I think about it. 🙂

Seriously, rank should never enter the equation. Sure, you are proud of your husband’s accomplishments, and rightly so. We all are. But they are just that…his accomplishments. If anyone receives special treatment for rank, it should be him because he is the one who earned it.

The best gatherings I have been at with other wives were the ones where no one knows the rank of anyone else’s husband. At a recent gathering, the subject was actually changed when a newer spouse brought it up, and I thought it was great. It reflected well on the ones who refused to discuss it.

Be Proud Without Being Obnoxious

Let’s all agree that we each have something (and someone) to be proud of as Army spouses. We all have reason to be equally proud because, no matter the rank, our spouse volunteered to serve our country and protect our freedoms. They all took the same oath, and they defend the same flag.

As Army wives, let’s all stand together, support one another, and let the word “rank” become taboo in our circles.

*Several women who are serving in the military have emailed me about this blog post. Rest assured, I realize you have rank, and you deserve to be respected for it as you have earned it.

In this case, replace every instance of “wife” with “husband” and vice versa. There is no disrespect intended towards female soldiers.

64 thoughts on “Army Spouses Have No Rank”