How many times have you opened a box and taken its contents out only to find that putting them back in the same box is IMPOSSIBLE?

This past Christmas my wife and I opted for an artificial tree rather than our standard live tree due to allergies that have plagued us the past couple of years. The tree came in a box that would surely hold the tree during its time in the attic between holiday seasons so we made sure not to destroy it while taking the tree out.

Once Christmas was over, my wife decided she would take down all of the Christmas decorations, including the tree, by herself. I told her to wait for me to help but once she sets her mind on something, that’s it.

Shortly after our conversation, I received a text that contained a picture of the tree “in” the box: 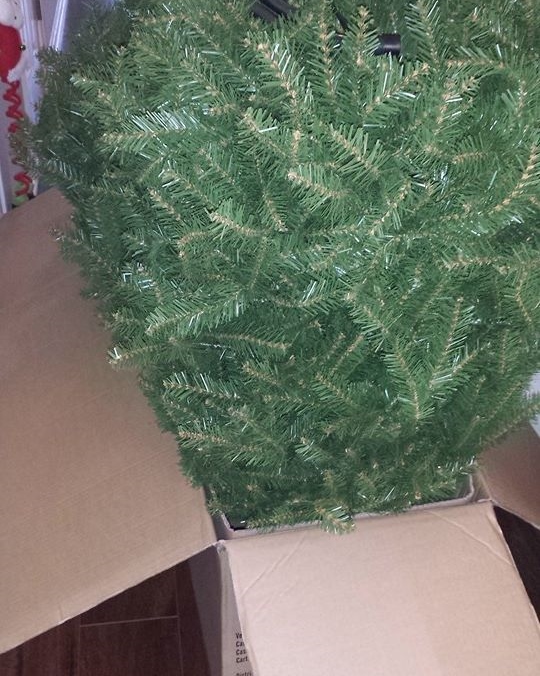 Surprise, surprise! She told me that she was giving up and going to the store to buy a storage bag. I convinced her to wait until I got home so I could try my hand at getting it back into the box.

It took two of us working together, with a few curse words thrown in for good measure, to get that tree back in the box. During the struggle, we used about a hundred feet of 550 cord and lots of packing tape.

Our arms and legs were scratched from the branches as we tried to shove it back into a box it was probably never really meant to go back into. And even though it’s safely stored until next Christmas, the tree probably won’t ever be the same again.

And that is the reason why I think that Christmas tree is like many of our soldiers, myself included.

As an Army Veteran, I can safely say that this is probably the best and easiest way for me to relate to how it feels to be thrown back into society after serving my country.

First, let’s start with the original package. No matter what kind of background you may come from, we all join the military from a world we have grown comfortable with. Good, bad or indifferent.

This box represents a life of comfort and stability with family and friends in an environment we know well – our own little safe haven.

Cue basic training and that box is ripped right open and out we come. Even though the box is still there, we know after being separated from it, that going back to it will never quite be the same.

My wife spends hours shaping the branches of our Christmas tree so it can stand tall and support the weight of what is about to be placed upon it.

Our drill sergeants and instructors certainly shaped our branches during training. We were asked to carry loads we never thought we were mentally or physically capable of carrying.

During this, some branches were broken or bent, and no matter how hard we tried, they would just never go back to their original state.

Next, it was time for decorations. Ever so carefully, the lights were added to the tree. String by string they were woven around each branch until every part of the tree was covered in lights.

Those lights represented my brothers and sisters in arms. They became a part of me and made me different.

We were all bound together by fragile wires – too fragile sometimes. When one of the bulbs would burn out, the impact was immediate and damaging to the entire strand.

And while it would sometimes light up again with a new bulb, it would never be the same. We all knew ultimately something was missing.

Ornaments Added One by One

After the lights were securely in place, the ornaments were added one by one to the tree. Most of the ornaments that were on our tree carry with it a special memory.

It reminds us of a trip we took, fun times together, our wedding day, or the day our son was born. They generally provoke happy memories of our childhood and the wonderment of the holidays.

With a soldier, each of these ornaments also represents a memory. But it’s more of a mixed bag.

It may be the excitement and fear of the first time wheels touched down overseas.

Or it may be about things that happened or were seen during missions that we only wish we could forget.

Or it could be the ones we want to hold on to forever that involve a friend who was ultimately lost in the fight.

Someone from the outside can admire the tree filled with lights and ornaments and maybe even hear about the stories that make the tree what it is.

But true understanding of the purpose of the tree and the impact of each light and ornament can never be had.

During the season, ornaments may move around, branches may have to be shaped again and burned out light bulbs may be mourned.

But ultimately, the tree fulfills its purpose and stands tall throughout the season.

At some point, Christmas has to come to an end, just like our time in the military does.

And slowly the ornaments are packed away as we try to suppress everything we’ve seen and heard during our time in service. Memories are pushed to their own compartment for safekeeping.

And as always, there seems to be that one ornament that was missed when things were being packed away. It was buried so deeply within the branches, it wasn’t recognized until much later.

It’s the ornament that haunts you. That one memory that is so entwined within your branches that it just never leaves you. And it changes who you are.

As the strings of lights are disconnected, all goes dark. The lights are carefully removed from the tree and packed away in separate boxes. Even though the wires are still connecting one bulb to the next, they’re no longer together as they were.

Finally, it’s time to take down the tree itself. It is broken down and forced to re-enter the box that it originally came from only to find that it no longer fits.

No matter the preparation that may take place before reintroducing it back into the once familiar box, it just doesn’t go back the same way.

And if it happens to make it completely back into the box, the ones who forced it are scratched up, branches are inevitably broken beyond repair, and rope and tape are holding it together.

It’s a struggle to make it fit and the box is inevitably bursting at the seams as the tree tries to push its way back through.

Most of all, the tree feels it serves no purpose when it’s packed in the box away from all of the lights and ornaments.

Even though it’s in a familiar box, it longs for the time when its branches were woven tightly with lights and it held ornaments of memories.

That was meaningful. That was a time like no other. That was the Army.

2 thoughts on “Reintegration: Trying To Fit Back In The Box”