Did you know in the past year, more than $143 million has been stolen from people involved in dating scams with people they met online?

Did you know that many of the scammers are posing as soldiers? OUR soldiers?

Did you know they are stealing pictures from social media profiles? Making up lies about the soldier, you as the spouse, and even your kids?

How I Found Out About the Dating Scams

I unexpectedly found myself in the middle of this world of scams more than a decade ago when I received the first email from someone telling me they were involved with a soldier who was deployed.

They had sent thousands of dollars to so he would be able to return home early from deployment.

The emails increased in frequency and pretty soon I was receiving multiple emails and Facebook messages every day.

The thing they all had in common? They were dating soldiers they met online. And the vast majority had already sent money by the time they reached out to me.

How the Pictures of Soldiers Have Changed

I asked them to send me any pictures they had of the soldier. In the beginning, the pictures were of people dressing as soldiers and it was like watching a military movie where your husband is critiquing everything wrong with the actor’s uniform.

But as social media grew more and more popular, it changed to be pictures of real soldiers.

I’ve been sent pictures of high ranking officers (no, actually you’re not dating General Patraeus) and, sadly, even pictures of soldiers who had been killed in action. Those are the ones I found to be the most despicable scams of all.

Some soldier’s pictures I have seen over and over again being used in many, many scams over the years. But on a daily basis, I will have pictures sent to me that I haven’t seen before.

Which means these scammers have fresh victims – and it could be your soldier.

Who Are These Scammers?

These scammers are overseas, usually in Nigeria or Ghana, making it near impossible for them to be caught.

They admit to finding people in vulnerable states to target. They do not discriminate on race, gender, sexual orientation, or age. If they think there’s a possibility of a payday, they will take on any role they need to.

They look for those who have recently been divorced, widowed, or experienced some type of traumatic event or loss.

They then play on those vulnerabilities and very quickly profess their undying love for them with grand promises of what their life could be together once they return from deployment.

That, of course, is what sets them up to ask for money. They either need it to continue communicating, to process a “fiancee form”, or to return home early from the deployment.

They ask for money to cover medical procedures, to pay for food, or because they claim their bank account has been locked.

Name a reason to ask for money and I can just about guarantee I’ve heard it through these scams.

These victims trust the scammer because they believe they’re talking to someone in the military. Someone who by the very definition of their job should be honest, trustworthy, and full of integrity.

I’ve had people reach out to me who have sent as little as a $25 iTunes card and others who have sent their life savings, maxed out credit cards, and wiped out retirement accounts.

Even after I’ve confirmed for the victim that it is, in fact, a scam, they don’t want to let go of the person in the pictures.

Just recently, someone said to me “I know this is a scam but I just got out of a bad relationship and I need to be loved. And he tells me that he loves me.”

It has always shocked me how many people willingly send their money to these scammers. Because of this, these scams are not going away any time soon.

For every person that I’m able to stop from sending money, there are thousands of others who are emptying out their bank accounts.

As long as they’re able to sit back and earn thousands from chatting online with unsuspecting people, these scams will continue.

How To Protect Your Soldier From These Scams

How To Check If Your Soldier’s Images Have Been Stolen

You can do reverse image searches of any pictures that are public. There are a couple of sites that you can use to do this. One is Google Images. Surprisingly, I’ve found this to be the least likely to track down pictures being used though I have found pictures using it.

I’ve had the most luck with tracking down the pictures with TinEye. Be aware that a lot of times, this won’t show you the social media profile where the pictures are being used.

What you are most likely to find is where victims of the scams have posted the pictures of the soldier to warn others.

The Victims Still Believe They’re In Love With a Soldier

Despite my efforts, many of these victims still believe it’s the soldier in the pictures who has scammed them out of money.

And what is always shocking to me, is even after being scammed, they will still claim to be in love with the person who has literally stolen money from them.

They are in love with how the scammer speaks to them but also with the soldier who is in the picture.

They tell me because they have pictures of him, he must be real. Some have even sent me pictures of badly photoshopped military IDs – some of the worst photoshop jobs I’ve ever seen in my life.

But if you don’t know what a military ID is supposed to look like, it’s easy to see how they believe this is a way for the soldier to prove he is who he says.

Reaching Out To The Real Soldier

But in others, they want to reach out to them because they’ve fallen head over heels for the soldier in the picture.

I’ve personally reached out to a handful of soldiers once I’ve found their real social media profiles. But in all cases, he was already well aware his pictures had been used. So I’ve stopped doing this.

In some cases, when the victim is just not giving up on the fact that the soldier is real and they believe they will be married as soon as he returns, I have found the real soldier for the purpose of showing them it’s all a lie.

In almost all cases, he is obviously married with kids.

Sometimes this helps to convince them, sometimes they just replay to me whatever sob story they’ve been told about what happened to his family.

I recently watched a documentary about the scams where a soldier had given up on proving to the women who have reached out that he’s not who they have been talking to.

He still tells them it was a scam but then has to proceed to formally break up with them.

What If Your Soldier’s Images Have Been Stolen

If your soldier’s pictures have been stolen, there’s sadly not a lot that can be done other than reporting the profiles on the platforms where they are being used.

And over my time in dealing with these scams, they are using all of the dating apps – eHarmony, Plenty of Fish, Zoosk, Tinder, OkCupid, etc.

Tracking down all of the places where they could be used will be a full-time job and even getting the profile removed is not always easy.

Some of the social media and dating platforms are not as quick to act on removing profiles that are impersonating others.

Regardless, you should report the profiles. For some soldiers whose pictures were stolen years ago, there are literally new profiles by the hundreds popping up daily. It’s like playing whack a mole.

I really hope you don’t find your soldier’s images out there as a part of these scams. But we must do what we can to keep the pictures of our soldiers from falling into the wrong hands.

These scammers don’t care who they hurt. They have left thousands of broken hearts and empty bank accounts in their wake.

And as if that’s not bad enough, they’ve roped those into it who are honorably serving our country. 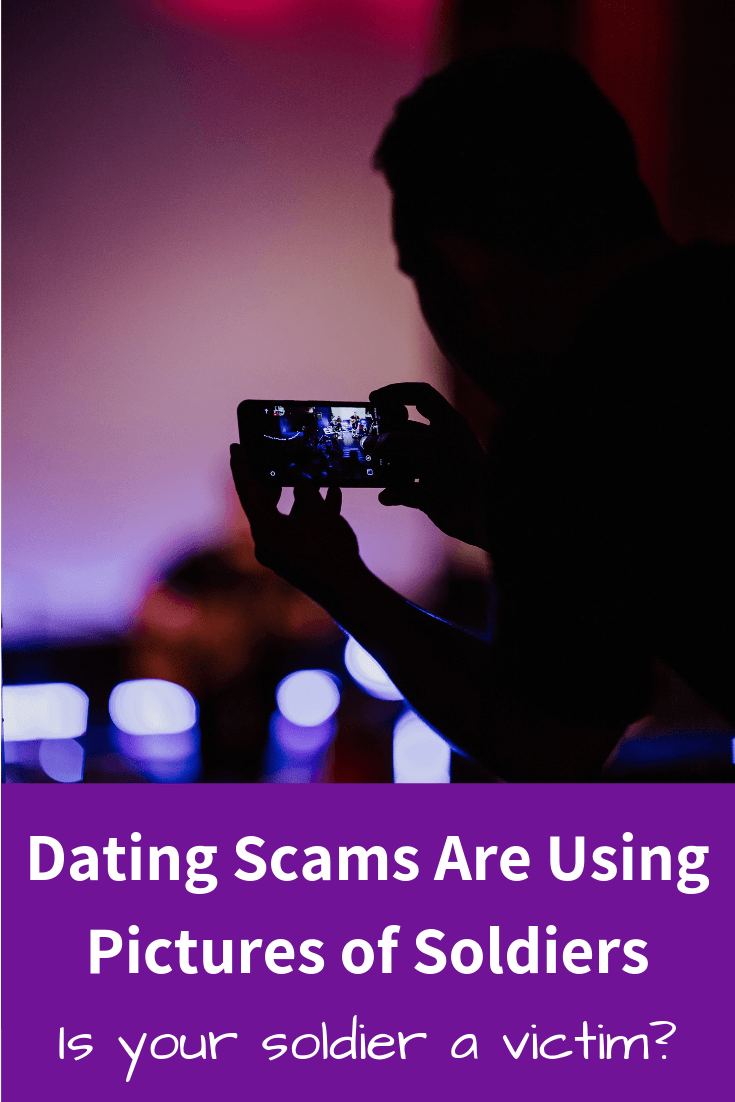